skip to main | skip to sidebar
Welcome to my blog here i will share with you my thoughts,feelings,information about ME/CFS and also Fibromyalgia hopefully will be of some help to you eventually can use this as a forum once it is established.Basically you will encounter the problems ive hit by having this illness,the hurdles i have overcome ,and my life adapted to living with this illness.I will post information about the illness helpful links and any questions you may feel will be useful.Thanks for taking time out to pop by please leave a message.

I am sorry ive not been around to update you but since September everything seems to have gone bellies up.I suffered with a pain around my eye for 5days on the 6th it got so bad a trip to the drs my hubby informed me.Well i went and saw regular gp who is fab!chatted explained what id experienced ,then she asked me to read the eye sight board well left eye sailed through.To my horror my rt eye i couldnt see a thing except a blurr.Well that was it all go from then on.How did i not realise ?well obviously my left eye was compensating for my rt eye.Asked if this has anyhting to do with my ME/CFS.Fibro or even side effect from medication i am on.Well i only no within 2 hrs from going to the drs i was sat in the emergency eye clinic.
Had various tests then and there ,and they told me then they were sending me for MRI AT THIS HOSP,and some Neuro tests but they would have to be done at the university hosp in Norwich.
I asked why they explained that one cause and my symptoms fit that is MS.Omg i sank and then i thought as you do on i wonder if in 2006 maybe i was miss diagnosed.but know was the answer this can be the first stage and the test they do look at the optic nerve in the eye.
Anyways it is now January and i still have no sight i went last week and they told me im going blind ....going feels like ive already gone!they now want me to under take a Flueroscide Angiograph...English ..die injected into hand series of xrays taken of the eye.Then i have to have another MRI scan but this time more indepth!then once had these have opd to go see them.My eye has no sight it is not reacting properly to most of the tests but WHY?they dont know have no clue.So i am battling on with this ontop of my ME/CFs and Fibromyaligia im getting there staying strong and not trying to think well what if?
Try not to think of it i hadnt noticed my sight loss before i went to doctors and some times forget now as my left eye is doing all the work except im told it is feeling the strain.It's the headaches and eye pain that drags you down daily .I should be used to headaches by now suffering fromCFS/ME.Well my joints aare my joints go to physio at the moment once aweek as my knee is not good since my last fall,and yep been told cant have knee op even though i have a knee of a 70 yr old!!!!(nice guy) Why ?because the knee will die before i do ......they must be psychic...lol..in ohter words im too young and they will only do one knee replacement .My argument surely i want my quality of life now not later on in life!
So the bqatlle goes on and i wish all my readers and followers some new some old a very Happy ,HEALTHY ,New Year!May long it continue.This year as i do make cards and crafts to raise money for Alzheimers by the way thanks for all donations greatly received but im now doing it for ME/CFS and Fibro!...Keep me out of mischeif when im able anyway.Well ive gotta go as had to cut my time on the old computer due to my eye.
Take care Love n hugs
Take one day at atime and cross each bridge when you come to it!
Judex
Posted by jude at 22:31 7 comments:

Why is it important to raise awareness about Myalgic Encephalomyelitis (ME)? by Nicola Karen Reiss

Morning all well it has been awhile since i posted but life has been hectic the past 3 months .Whihc has had a knock on effect on my ME.I will go into more details later post.The worst news is that ive had to come of the medication given to me by papworth hospital this was due to a servere reaction yet again to the medication i had to keep me a wake.As a result with everything else going on im so fatigued and tired some days back to sleeping 20 hrs aday.that was the reason i went on the medication whihc i must say did work kept me awake .But theres so many side effects always the way you find something that makes abig difference to everyday livivng but with it comes the chance of the effects.Both times ive tried it ive had different servere medical effects.The GP has taken me of it .so now im back struggling to pace myself so's i dont sleep the days away.Mind lately theres not much chance of thatas my body just aches ,my joints ,my nerve endings you name .Some days just sleep ,lie on the sofa unable to get comfy position.
I promise i will be back soon with an update as all sufferes know you just take a day at a time.
Hope your all pacing well
love n hugs judex
Posted by jude at 22:49 1 comment:

Im so sorry ive not been on for while things have been so hectic.With my health mum being rushed into hospital,my daughter having her operation the start of the year is certainly a hospital one...lol.
I have recently had to come off my Modafinil medication papworth put me on some time ago.After having 3 month trial and getting severe side effects my gp took me off.I went back on them in November and now again have had to come off due to the side effects.I cant beleive im saying this but sleeping all day is far better than the side effects.
I was so interested to see the article lately about the poor girl who had ME for 17yrs,finaly with her nmums help died.It has certainly brought ME into the news once again whihc is good more understanding of this crippling life changing illness needs to be made aware & not classed as yupiee flu or god damn laziness.May she rest in peace ,i thank the l;ord i am no longer in that state although im much improved i still suffer daily some days not having the energy to get out my pjs just about come down stairs.
Thanks Heather for the interesting article about Norfolk/Suffolk ME Support and how they are now improving the services about time i will keep you updated if i hear anything .
hope your all keeping well as can be expected and promise to pop by more often and update you all
love n hugs judex
Posted by jude at 08:08 5 comments:

Just checked my post blow me i had already posted about papworth ...lol
Posted by jude at 21:56 1 comment:

This week i have suffered with my joint pains terrible to the point where ive ended up in bed yet again!!The good news well i hope it is about 18months ago i was given a drug or should says perscribed sounds bit better ...lol to help with my CFS.Anyway after 3 months it was fantastic my quality of life from where i am had improved 65% not a cure but a bonus .Until for week i suffered pins and needles in my left thumb first then hand then the whole of my arm was effected .I went to Gp who stopped the drug finito,i rang papworth and told them she said leave it with me .Anyway cut long story short said shed speak to consultant and let him know .
well few weeks ago had my regular 6month check up and the consultant done some research and never heard of this happening with this drug .
So im pleased to say they are going to give me another try yipeeeeeeeeeeeeee,as want to see how i get on this time and will monitor me closely .Bet GP not too happy as he wasnt all that last time as it is very expensive one of these post code lotary drugs i feel as we had to get ok from PCT.You watch same thing will have to happen this time.
Well i have at the weekend managed some crafting for my Alzehimers fund raising so pleased about that i do find crafting very theraputic if only i can do little at a time it helps .
Anyway do hope you all have good painfree weekend
Take care gentle hugs
judex
Posted by jude at 21:46 1 comment:

ME/CFS Blogs that may be some interest

If you are aware of other suffers blogs please leave message and link and will go and add these all help us one way or another.

Please take this ribbon in support

Videos related to 'Symptoms of Chronic Fatigue / ME & Fibromyalgia Explained' 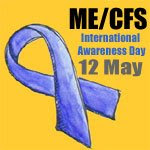 jude
Im jude married with two daughters who love crafting too.We live Norfolk / Suffolk border,have done since moving from London 7yrs ago.I have been crafting more than 15 years.Love Scrapbooking Cardmaking,Altered Art,Atc's anything Paper crafting.my hobby expanded into an enjoyable buisness for many years unitl giving it up due to ill health. I have afew blogs ,my own crafting,challenge blog with the help of my design team and recently created a blog for all fellow ME/CFS,FIBRO sufferers.Hopefully will bring inspiration to crafters and information to fellow suffers of ME/CFS.I also am an avid fund raiser for Alzehimers